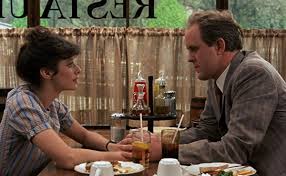 Remember the 1983 movie “Terms of Endearment”? It was a classic tearjerker that I loved when I first saw it although now I’m not so crazy about as it’s yet another in an endless line of films where the mom dies. Now a mom myself, I far prefer movies where the mom runs off with the pool cleaning. But there’s a scene in that movie I often think of, especially when I’m around someone who seems to be going out of their way to be a First Class Creep.

In that particular scene, Debra Winger’s character is buying groceries but she doesn’t have enough money to pay her bill when the clerk rings her up. Her kids are whining. The people behind her in line are glaring. The clerk is smirking as Debra digs through her purse looking for spare change. Finally Debra starts putting items back while the clerk smirkingly deducts each one from the total. Exasperated, Debra finally says to her something along the lines of, “Look, I’m sorry about this but do you have to be so damn mean?”

And the answer is no; the clerk doesn’t have to be so mean. But she is mean and she’s apparently getting a true thrill out of it. Debra is ultimately rescued, in more ways than one, by John Lithgow. He helps pay for her groceries and they start an affair but, alas, life seldom imitates movies. When the rest of us are being subjected to mean jerks pretty much all we can do is glare back and then later self-medicate with a king sized Snickers.

Usually, however, the mean people are on the other side of the counter and the clerks are on the receiving end of the abuse. I was waiting in line at the grocery store not so long ago while the clerk rang up the groceries of the woman in front of me, a sour faced gal I shall call Miss Jerk. Another clerk approached and while Miss Jerk’s check was being scanned the clerks chatted for possibly thirty seconds. Miss Jerk was immediately incensed. Very dramatically she turned to me and another woman in line and loudly said, “Can you believe this?” as she gestured at the cashier. “I’m the customer and I don’t think she should be talking to or paying any attention to anyone but ME!” The other woman in line and I exchanged embarrassed glances before focusing on the floor. The cashier tried to stand up for herself. “I wasn’t ignoring you but there wasn’t anything more I could do for you while your check was being scanned.” Miss Jerk sniffed loudly. “That,” she sneered, “is not my problem!” With that she grabbed her plastic bags and stomped off to terrorize more people.

“Do you get a lot of customers like her?” I asked the clerk while she rang up my groceries.

She shrugged. “Not really but enough. That one’s really bad. She’s rude every time she comes in here. We all try to avoid her.”

So Miss Jerk obviously gets her jollies being a rude jackass whenever she goes to the grocery store for more Metamucil. That said, there was a time when I was on the receiving end of a Terms of Endearment-esque clerk. I was again shopping for groceries (my favorite hobby) when I inadvertently made mistake after mistake when I reached the checkout counter. Like a dum-dum, I started things off on the wrong foot by remarking to the cashier that I didn’t recall hearing Muzak played in that particular store except at Christmas time. “No, the music plays all the time,” the clerk snapped. “I should know. I work here. You don’t!” Suitably chastised and clearly warned that chit chat wasn’t a good idea, I began unloading my cart. “Don’t put your milk on the counter,” Suzie Sunshine warned me. “It’s too heavy for the belt. And put your items so the scanner code shows. And leave the pop in your basket. It’s just as heavy as the milk. And…” With every instruction she looked at me expectantly, although I was clueless as to how I was supposed to respond. Never too swift with comebacks, I finally said, “OK,” and kept my mouth shut for the rest of our relationship.

I suppose that there are people everywhere who would rather trip their fellow human beings rather than smile or, heaven forbid, offer a helping hand. I should feel sorry for them and I do. Although next time I run across one I just might pull out Debra Winger’s question and ask them if they have to be so damn mean?

I’m guessing that most of them will answer with a resounding YES and for that reason I thank God for self checkout lines and Snickers.

One thought on “Terms of (Not So Much) Endearment”