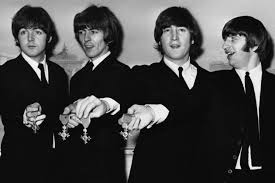 Many, many, many moons ago, I vividly recall reading a comic book about the Beatles and their love lives. All right, perhaps I vividly recall having the comic book read to me but I can still remember how mesmerized I was by its detailed report about the relationship status of each of the Fab Four. According to that impeccable journalistic source, John was married to Cindy and had a bouncing baby boy named Julian. George and Ringo had steady girlfriends, and Paul apparently spent all of his free time hanging around his guitar-shaped swimming pool waiting for Miss Right to appear. Being a full-time dreamer from birth on, I was pretty sure that Paul was waiting for me in spite of the fact that I hadn’t finished kindergarten yet and he had a good twenty years on me.

He wasn’t waiting for me, of course, and I got over that but it recently occurred to me that the Beatles truly represent an ideal path to romance that any female can follow throughout her life, a pattern that just might cut out a whole lot of the guesswork that has always gone hand in hand with love and romance.

Let’s start with Paul. Paul, with his baby face and big brown eyes was known as the “cute” Beatle. He is the kind of boy high school girls should focus on dating. High school dating should be all about shallow relationships where the most important factor in a boyfriend is how handsome he is and what kind of car he drives. Paul is also the most sentimental Beatle, a personality trait that goes perfectly with the drama of high school. The Pauls of the world would never forget a birthday, would write songs to commemorate such earth-shattering events as first kisses, proms, and getting one’s drivers permit. Paul would be a Perfect Starter Boyfriend, an ideal choice to help a high school girl get used to the world of dating in the least painful way imaginable.

After high school graduation, it’s time to move on to college and a deeper, more serious kind of relationship. This is when George steps up to the bat. George was the quiet, introspective Beatle. In other words, perfect for what happens in college as your eyes slowly start to open and you realize that it’s entirely possible that there’s more happening in the universe than only what applies to your life. A boyfriend like George would find philosophy books for you to read at used book stores, drink Fair Trade coffee with you in dimly lit esoteric digs, and earnestly discuss socially relevant topics that might not necessarily interest you but sure make you feel like a grown up talking about them. George and all his seriousness would be wonderful during college but probably wouldn’t be that much fun over the long haul. Upon entering your twenties, it’s time for a real test. Enter: John.

John would most definitely be the ultimate challenge of this group. Smart as a whip, faster than the speed of light, and positively loaded with a variety of quirks, problems, and hang ups, John represents the guy most of us end up marrying anyway. John would both drive you crazy one day and then turn around and make you happier than you’d imagined possible the next. A union with John might last throughout your middle ages, perhaps even forever. One thing is for sure: he’d always keep you guessing.

If things didn’t work out with John for the long haul, it’s Ringo’s turn. I can’t imagine anyone more pleasant to spend one’s twilight years with than Ringo. Affable, funny, and fun, what’s not to love? He doesn’t seem to worry about anything and apparently appreciates his life exactly how it is. In other words, Ringo is the complete opposite of a Grumpy Old Man. And who wouldn’t want to be with a Cheerful Senior Citizen on the way to one of the many doctors’ visits that seem to make up old age?

So that’s my dating template for mothers to hand down to their daughters and granddaughters. Seek out some Fab Four types and go down that long and winding road of romance, one Beatle at a time.