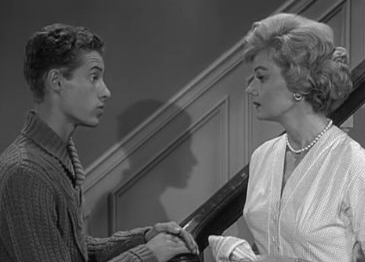 I’ve never truly understood that old saying about flattery getting you nowhere. It’s been my experience, both as the flatterer and the flatter-ee, that flattery can open doors and move mountains with remarkable ease. But that might be just me.

Of course, there’s a big difference between shallow flattery and a sincere compliment but to be totally honest, I’ll take either. I don’t even mind insincere flattery, like the kind Eddie Haskell used to dole out to Mrs. Cleaver on a regular basis. June always seemed annoyed when Eddie complimented her on her hairstyle or freshly starched apron or the way she baked chocolate chip cookies, the look on her face a mixture of impatience laced with thinly veiled disgust. It was obvious that June could see right through him and knew that Eddie sucked up to every adult in his radar but I still don’t know why that bothered her. I loved it when my kids had friends over who a) spoke to me; and b) gave me a compliment although I can count on one hand the times that happened over the years.

I especially don’t mind the completely insincere flattery of being carded at the local liquor store. Unless the clerk is rolling on the floor with laughter when he asks me for my i.d., I think he’s one smart cookie to smile and confide, “You know, I have to card everyone who looks like they’re under 40.” I know he’s lying. He knows he lying. But I don’t care because at that moment I am not only delusional, I’m also completely flattered. If at the same time he compliments me on my choice in sauvignon blanc or perhaps my attractive–yet youthful–running shoes, you can be sure that I’ll make a point to tell the manager on my way out how helpful his staff is, especially the Willie Loman wannabee on register three. I don’t deny that I’m easy. Call me “young lady” or “miss” and I’m sold and you have a friend for life. Pathetic and sad, for sure, but true.

Frankly, I don’t think anyone compliments or flatters or even pays enough attention to other people enough these days. The majority of us are so wrapped up in ourselves (to the point of making the rest of the world want to collectively throw up) that we seem to have forgotten the true art of giving a compliment or a flattering comment and just how much juice such a comment can carry. Almost anyone would rather hear a compliment, no matter how small, than, well, nothing.

A friend told me that she thinks it’s the scarcity theory–which she explained as meaning that there are people who think that if they give someone else a compliment, there will somehow be less compliments to go around when it’s their turn to hear something good about themselves, as if there is a big basket of compliments somewhere in the sky that is eventually going to run out, like a well going dry. Maybe. But I think it’s more about the fact that most people don’t even realize how good it feels to give compliments, not only receive them. It feels great to like someone’s hairstyle or new car or latest Facebook post. It’s fun, it’s free and it’s completely non-fattening. I also think that many people don’t truly understand that if they say something nice to someone else, there’s a mighty good chance that flattered person will give them something, like a chocolate chip cookie, a glass of wine or possibly even a raise.

Not that any potential flatterers should do it just to get something out of it. Getting a cookie or a glass of wine or a raise is the icing on the compliment cake. What feels the best about tossing a little flattery out there along with some sincere compliments is the smile you get in return and the knowledge that not only have you made someone’s day but that you, too, can Eddie Haskell with the best of them. Only you, unlike Eddie, mean it.