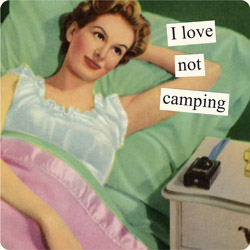 Every summer I hear people talking about getting ready for their annual camping trip. While I listen to them talking about the joys of being in the great outdoors with nothing between them and all that unbridled wilderness two thoughts always pop into my mind: 1) haven’t they ever watched “Deliverance”? And 2) haven’t they ever heard of a Holiday Inn?

What it comes down to is that some people are campers and some people aren’t. I definitely fall into the latter category due, in part, to being raised by a father who spent four years sleeping on the ground during World War II and who, once he got out of the Army, refused to contemplate any form of camping again. My aversion to camping also stems from my basic nature of being the kind of person who flinches at the thought of so much as one night away from such creature comforts as hot water, well-lit bathrooms and televisions with remote controls.

Avoiding camp-outs was easy until the summer I was 12 and all of my friends decided that it would be “fun” to go to a camp located in northern Wisconsin. I convinced my mother that I faced a summer of being socially ostracized if I too didn’t attend camp and early one Monday morning I found myself on a bus along with the rest of my pals heading for two weeks of campfires, nature walks and making lanyards under the northern Wisconsin sky.

My plans for a summer of fun with my best pals quickly fell apart almost the moment the bus pulled into the camp. Without even unpacking, we were told to get into our bathing suits and hop into the lake for a swimming test designed to separate the swimmers from the non-swimmers. It was with true dismay that I learned that, even after several summers of swimming lessons, I was still officially a non-swimmer undoubtedly because I was never quite able to put my head completely under the water and the dog paddle was my preferred stroke. My dismay deepened when I learned that instead of being with my friends—who could swim—I would be in the tent designated for non-swimmers, the Winnebago tent.

Such unfair segregation didn’t stop merely at sleeping quarters. Swimmers got to do all kinds of water activities including canoeing, water skiing and, of course, swimming, while non-swimmers had to hike, play volleyball and work on our underwater breathing skills. Dejectedly dragging my luggage to the Winnebago tent, I felt a tsunami-sized wave of homesickness wash over me as I realized that I was still being social ostracized, although in a pine-scented setting.

“Cheer up,” my counselor advised me. “Next weekend our tent is going on an overnight camping trip in the woods. You’ll love it.”

While I sincerely doubted that, no other options other than hitchhiking several hundred miles home were open to me.

The morning of our overnight camping trip dawned cold and rainy. My tent mates, counselor and a guide named Chuck (who, in retrospect looked alarmingly like Charles Manson) and I were driven out into truly the middle of nowhere where we were unceremoniously dumped. I watched as the bus drove away, getting smaller and smaller until soon it was just a yellow dot on the horizon. “How can we get in touch with the bus driver if anything happens?” I asked the counselor since this light years before cell phones were around.

I didn’t believe her but again since there were no other options beyond being a good sport, I picked up my gear and followed everyone into the woods. The plan was that we’d camp for two nights along a trail that would eventually end at the shores of Lake Superior where the bus would pick us up Sunday afternoon. My main memory of that trip was being surrounded by an intense greenness as we slowly moved under an endless canopy of trees, singing camp songs and discussing what dehydrated delicacy we’d have for dinner that night. I also remember millions of mosquitoes that apparently found people with type O blood to be positively delicious and a few random sightings of large hairy dark brown things that might have been bears but were more likely Big Foot.

The rain stopped around the time we burst out of the woods onto Lake Superior’s shoreline two days later. Lake Superior, with sun diamonds dancing off the water, was beautiful but to me there was something even more beautiful coming into our view. The camp’s bus was tootling into a parking lot several hundred yards away ready to take us back to hot water, bathrooms and almost civilization. Climbing onto the bus gratefully, I knew that my first foray into the woods was also going to be my last.

To my everlasting delight, I was right.