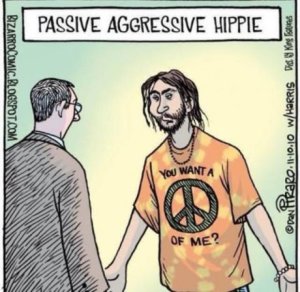 I don’t remember ever hearing the term “passive-aggressive” until I was well into adulthood. Maybe it didn’t exist before then. Maybe before that time people were either passive or aggressive but not both because, really, it’s not that easy to do two things at once, especially two things that are supposedly complete opposites of one another.

But when I did hear it, it took me a long time to understand what it was although I kept on hearing, “Oh, that’s so passive-aggressive.” I finally asked a friend to explain what that meant to me and her example was: “Telling someone you’ll meet them at the movies when you know you aren’t going to show up and not letting them know that you aren’t going to show up.” Well, that didn’t sound passive-aggressive to me, it sounded plain rude. Then I was told that passive-aggressive people are people who want to say no but can’t because they want everyone to like them. I can understand that but I still can’t see saying I’m going to be at the movies that night and never appearing. I think that would make a lot more enemies than friends and you’d wind up having absolutely no one like you.

It was a cringe-worthy moment when I realized that I excelled at passive-aggressive behavior although in my defense a lot of my behavior fell more on the passive side as opposed to the aggressive.

Take returning phone calls, for example. For as long as I can remember I have disliked returning telephone calls. Actually, I never liked answering the phone due to an episode of “The Twilight Zone” where a little boy kept getting phone calls over his play telephone from his dead grandmother. I fretted constantly over what I would say to my dead grandfather if he called up one day and I was the one who answered the phone. (“How’s the weather up there?” “Any good golf courses?”) That one little phobia never truly went away and even now, when I know who is calling thanks to smart phones, I still have a dreadful moment of panic before saying hello.

Not returning phone calls has become much easier (and less passive-aggressive) since the advent of texting. I daily bless whoever invented that remarkable communication technique since there is no way I’m going to get a text from my dead grandfather, but even if I did I’m sure I wouldn’t mind answering it. Texts are possibly the best invention ever for telephone phobics and I am ninety-nine percent sure I’ve never gotten a text I didn’t answer.

Same with emails. I always respond to any email I receive even the ones I probably should ignore, mainly because I don’t really have that much else going on in my life and responding to emails gives me a brief illusion of having a chock-filled schedule. But so many people don’t answer emails these days, at least mine, that I’m starting to get a bit paranoid. I chalk it up to them having busier lives than I do but I can’t help suspecting that at least five percent of the time it’s more about not answering because they are being, you guessed it, passive-aggressive.

So what’s a more passive-than-aggressive person supposed to do? Write less emails comes to mind. Put up less passive-aggressive posts on Facebook is probably also a good idea. Attempting to be neither passive nor aggressive is probably the best idea of all and accept that most of the time people really aren’t out to be jerks. It only seems that way.

In other words, answer the damn phone because it’s not going to be a dead relative. But on the very off chance that it is a dead relative, now that would be something to post on Facebook!